Is Your Disinfectant Safe and Hazard Free?

Do you know GraphEat is being wisely used widely across Pakistan by households and leading institutions to effectively fight the ongoing disease. GraphEat is water based, ecofriendly (alcohol, dye, fragrance, heavy metal free) multipurpose Chlorine Dioxide based disinfectant which is purely Halal. GraphEat is the best available option (ClO2 is approved by both EPA & CDC US for the current situation to counter Corona Virus). The GraphEAT chemical that we promote as a disinfectant is a patent of M/S Scomi-Platinum, Malaysia. It has a chemical name of chlorinedioxide. It is an efficacious bactericide, fungicide and virucide that have shown superior performance over conventional biocides. It kills waterborn micro-organisms including; bacteria, coliform, E-coli, cinobacteria, and viruses including hepatitis, yeast, fungi, protozoan, actinomycetes, cysts, anthrax and methanogens and reduces iron and manganese.

Some common Disinfectants mixed with Water are being marketed worldwide. Here are common disinfectants and their comparisons:

Almost, all of the above are recommended by WHO and EPA (USA) and other EPAs/Govenmental Chemical Examination and Health Care Authorities. Important is to know that the effectiveness, safety of use and cost are the selection criteria.

Disinfectants have various uses with proper dilution. For achieving 99.99% Disinfection results, below concentrations are required:

If you wish to disinfect through mist tunnels at gates or sweep on floors etc., any weaker concentration dilutions of any of the above chemicals can not achieve the desired results e.g using 1% Hydrogen Per Oxide instead of 6% or using 0.25 % Bleach instead of 0.5% or 20 ppm Chlorine Dioxide instead of 50 ppm will not disinfect, for example, the human body while wearing clothing and passing through a mist tunnel. 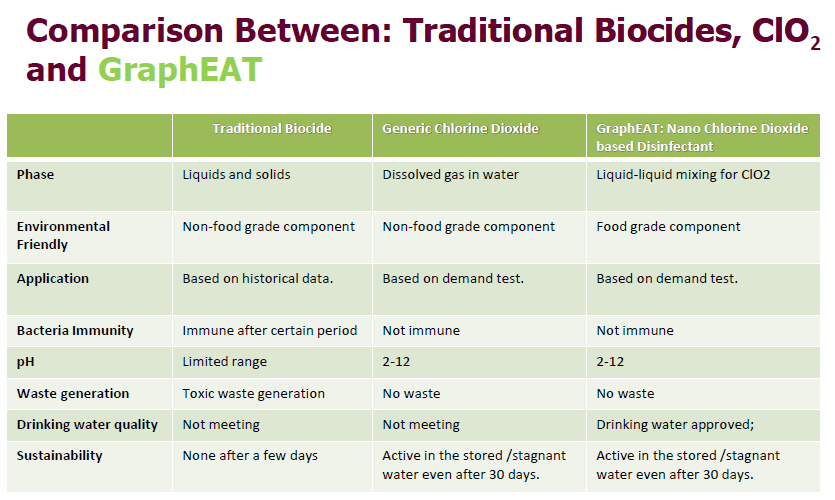 Do you know disinfecting Fruits, vegetable & meat with Hydrogen Peroxide chemicals has a really negative impact human health! Likewise, there is no backing whatsoever by FDA or approval for application on edible items for popular H2O2 based disinfectant. At 3 percent H202, the popular fad brand only kills 47 percent Bacteria. That too already has a composition of 2% and people are being asked to further dilute it. The so called popular brand really stinks after two days in spray bottles and when applied on hands it gives very bad odor.

On the contrary, Chlorine Dioxide (50 ppm) is more effective, hazard free, irritation free, cheapest, safest & ECO friendly than the so called “Sanidol” brand by Descon (More powerful and safer than Hydrogen per Oxide). GraphEat outperforms all other biocides as it requires a single biocide treatment compared to other biocides (Bacteria does not build up immunity). It offers utter ease of operation since Low corrosion rates protects equipment and ensures long term production. It protects investment and reduces chemical consumption Increase profitability. GraphEat has minimum environmental impact as it is approved and accredited globally and has no byproduct and non-toxic.