There are four parts of a cooling/refrigeration system and all air conditioners essentially go through the cycle of compression, condensation, expansion, and evaporation in a closed circuit. The compression phase involves a compressor device which makes use of an electric motor to compress the refrigerant coolent. Today hermetically sealed reciprocating compressor is widely used for the refrigeration and air conditioning applications. This type of compressor can use a drive to control the compressor motor speed to modulate cooling capacity.

A Variable Frequency Drive (VFD) is a type of motor controller that drives an electric motor by varying the frequency and voltage supplied to the electric motor. Other names for a VFD are variable speed drive, adjustable speed drive, adjustable frequency drive, AC drive, microdrive, and popularly here in this application called as an Inverter. Since Inverter is a device which converts Direct Current (DC) input into Alternating Current (AC) output, it is referred to as DC Inverter (to remove any ambiguity because a DC-DC converter is commonly confused with DC-AC Inverter). A DC Inverter Air Conditioner has a compressor which is VFD or Inverter controlled (as descibed above) and the whole package is commonly called as Inverter Air Conditioner or DC Inverter Air Conditioner.

So, the basic operating principle of an Inverter is pretty straightforward as it is comparable to the technology used in cars, where you need to press the throttle harder to go faster. Compressor speed (as an analogy say the engine running and its pistons creating the torque) effects the performance output (speed of the car). The Frequency (throttle controlled by VFD) is directly related to the motor’s RPM’s and hence cooling or heating performance (car’s speed). In other words, the faster the frequency, the faster the RPMs go. If an application does not require an electric motor to run at full speed, the VFD can be used to ramp down the frequency and voltage to meet the requirements of the electric motor’s load. As the application’s motor speed requirements change, the VFD can simply turn up or down the motor speed to meet the speed requirement.

In a more convenient and technical way, Solar Ac is an Air Conditioner described as using “Inverter technology” or “Inverter equipped” has the ability to continuously control its thermal transfer rate by modifying the compressor’s speed in response to the demand for cooling . Variable Refrigerant Flow (VRF) phenomena is typically adopted with an Inverter equipped Air Conditioner which adds a VFD and Control Circuitry alongside the compressor in order to support variable motor speed and thus variable refrigerant flow helps regulate the conditioned-space temperature.

By contrast, traditional air conditioners regulate temperature by utilizing a compressor that is periodically either working at maximum capacity or switched off entirely. Fixed speed compressors start or stop automatically in order to sustain the desired temperature, but an inverter unit regulates regulates the capacity of the compressor instead. Frequent on/off switching of the compressor means high initial torques for the compressor to start running and hence more surge of currents during transient times, hence increase in electricity bills.

So much so, the thermodynamic cycle is explained with this image:

Note that the four-part heat exchange cycle is divided at the center into a high side and a low side. The same refrigerant is used to move the heat from one area, to cool this area, and to expel this heat in another area. Gases give off heat when changed from gas to liquid.

We will get to solar ac price list but first learn about micro-controller:

A microcontroller can sample each ambient air temperature and adjust accordingly the speed of the compressor. The alternating current is used to drive an induction motor since the speed of an induction motor is proportional to the frequency of the AC, the compressor can now run at different speeds with the use of VFD the same phenomina that makes 12v Solar Fridge Price in Pakistan fairly competitive to Inverter Fridge.

The inverter air conditioning units have increased efficiency in contraction to traditional air conditioners, extended life of their parts and the sharp fluctuations in the load are eliminated. This makes the Inverter AC units quieter, with lower operating cost and with less broke downs. The Inverter AC units might be more expensive than the constant speed air conditioners, but this is balanced by lower energy bills. The payback time is approximately two years depending on the usage. The additional electronics and system hardware adds cost to the equipment installation but can result in substantial savings in operating costs. Eliminating stop-start cycles increases efficiency.

Generally, VFDs allow you to match the speed of the motor-driven equipment to the load requirement. Electric motor systems are responsible for more than 65% of the power consumption in industry today. Optimizing motor control systems by installing or upgrading to VFDs can reduce energy consumption in your facility by as much as 70%. Additionally, the utilization of VFDs improves product quality, and reduces production costs. Combining energy efficiency tax incentives, and utility rebates, returns on investment for VFD installations can be as little as 6 months.

By operating at varying speeds, VRF units work only at the needed rate allowing for substantial energy savings at partial-load conditions. Heat recovery VRF technology allows individual indoor units to heat or cool as required, while the compressor load benefits from the internal heat recovery. Energy savings of up to 55% are predicted over comparable unitary equipment. This also results in greater control of the building’s interior temperature by the building’s occupants.

The fixed speed compressor in a standard air conditioner runs at 100% capacity when it is started, but an inverter unit starts at a low level and then progressively enhances its capacity, depending on the requirement to heat up the room or cool it down. DC inverter air conditioners make use of a variable frequency drive to regulate the motor’s speed, thereby controlling the speed of compressor too. Frequency acts as the the input variable to control the compressor speed. The current ambient air temperature is sampled by using a microcontroller and the compressor’s speed is adjusted appropriately.

Pulse Width Modulation is a technique to control power applications, since analog systems such as linear power supplies undergo large heat dissipation (Energy Loss) and digital signals represented in case of PWM are fairly easy to convert back to analog with a minimum of hardware.

Variable Frequency Drive includes a rectifier that converts the incoming Alternating Current (AC) to Direct Current (DC). It then utilizes Pulse Width Modulation (PWM) of the DC in the inverter to generate AC of desired frequency.

Capacity modulation is a way to match cooling capacity to cooling demand to application requirements.

Scientists at Zorays Solar have researched an environmentally friendly cooling technology that does not harm the ozone layer. This thermal air conditioning is achieved by using solar energy and therefore reducing the use of greenhouse gases.

Q. What is the market offering in the name of solar air conditioner for home?

Looking for a hybrid air conditioner price is futile owning to poor after-sales.

Q. Oh so can I just buy a solar powered split air conditioner and that is it?

A. Well, yes if you have got better retail rates at what we wholesell. Umm and a lot more like explanation of a VFD device. Get it? No? You will basically need:

That sums up air conditioner with solar panel price.

Q. How many solar panels needed to run an air conditioner?

There is not much need to run air conditioning in cloudy oir rainy days.

A. It is a competitive market, and turning an air conditioner on solar power is no big deal. But selecting the right components optimized at the right price is mastery. We are the only solution providers who have patented suntracked solar power poles that let the client remain hassle free thinking about its performance.

We have in fact made it into a small solar air conditioner system which occupies least space on your roof top or any other facility. To discover a case study, experiments were run in June 2015 to find out that if such a solar air conditioner is ran all day long; the overall bill of a a 10-marla home is 1500 rupee only.

Q. What happens to the performance of my solar system in rainy days? 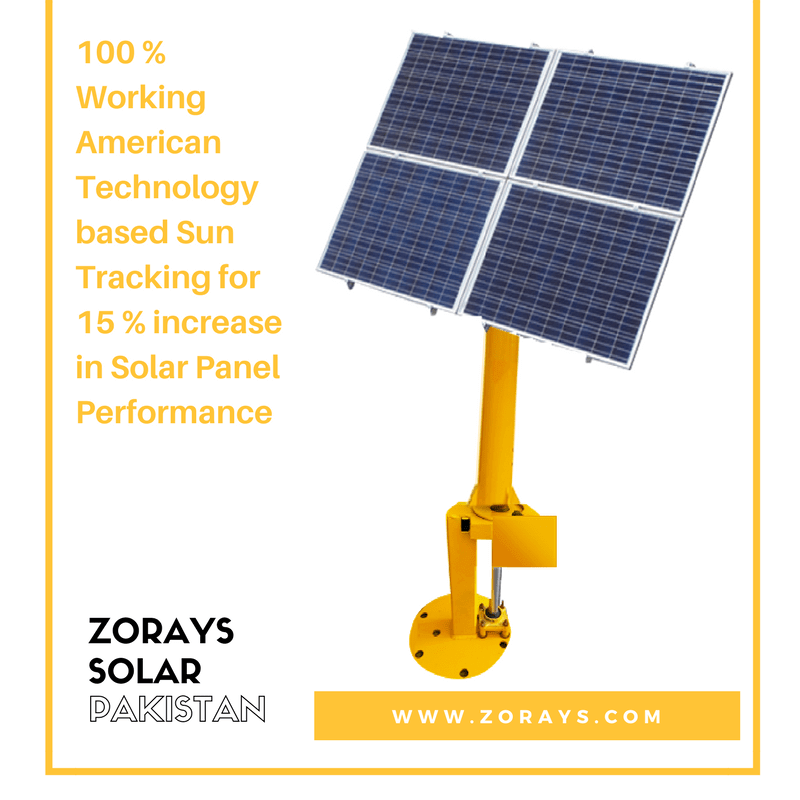 Luckily, with our Sun tracked Solar Poles we enhance the performance of each panel and correspondingly the upfront cost of additional panels is reduced vs. the fixed mounted offered solution availaible in the solar air conditioner in Pakistan market.

A. As seen from the picture buying a 48v dc air conditioner is futile and adds to the cost since it is expensive. A usual inverter based AC suffices to serve as solar ac room air conditioner. Since same amount of panels to be installed either way; we recommend you to replace your conventional split AC with a 1 tonne inverter AC of your choice from the given brands.

Q. Why 1 ton ac prices in Pakistan are useful to consider?

A. The fixed speed compressor in a standard air conditioner runs at 100% capacity when it is started, but an inverter unit starts at a low level and then progressively enhances its capacity, depending on the requirement to heat up the room or cool it down. DC inverter air conditioners make use of a variable frequency drive to regulate the motor’s speed, thereby controlling the speed of compressor too. Frequency acts as the the input variable to control the compressor speed. The current ambient air temperature is sampled by using a microcontroller and the compressor’s speed is adjusted appropriately making 1 ton ac price in Pakistan the most desireable.

Effectively, we would want the AC to never trip off and always to stay slow and steady and keep trying to win the race. A 1.5 tonner AC is equally probable; but the supplied system is more effective for the above reason.

Q. What is the pay back time from solar system ac price?

A. It always melt down to monetary aspects and your budgetary requirements. We have focused to keep on consumer point average across all our customers and come up with a reasonable pricing plan. Please remember that the backup time could be reduced to achieve the same project within your financial constraints; however, the pay back could still increase. Above all the same inverter ac is reversible and could be utilized in winters when cooling is not required. Are you searching for the best solar air conditioner in pakistan price? Look no more anywhere else: Changhong Ruba CSDH-18SA02G – Heat & Cool Inverter AC – 1.5 Ton – Silver

The total time from file submission to the relevant Distribution Company is no less than…
Zorays Khalid 1
Latest Solar Energy Technology Research
August 9, 2021

What is lightning arrester? What is its functionating and what materials are used? A lightning…
Solar Energy 0
Latest Solar Energy Technology Research
June 5, 2021

Today, most of the companies pushing themselves as top class are not even licensed with…
Solar Energy 0