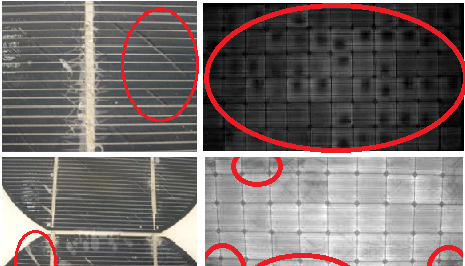 How to select Solar Cell and Solar Panels Pakistan?

Low-quality solar panels and Low-Cost solar modules are basic hurdles for adaptation of solar panel system in the third world countries like Pakistan. The Solar Power is perfect solution as Alternate Energy provided the selection of system components is perfect. Especially the Solar Modules which are the base for generation of power.

Distinguishing good quality – early payback correct modules among many brands from the market is a technical job. Hi-Quality Solar Panels (Modules) are commercially available with > 16% efficiency and > 85 % fill factor. Polycrystalline or Monocrystaline modules made by different manufacturers look similar in their types.

Here are some quick tips for selecting proper modules as described below.

Broken Solar Cells: Look on the solar cells laminated on the modules, four sides of all solar cells should be fine side lines without any breakage or white hair line at any position. If there is any hair line seen on any solar cell that modules should be avoided. Why? The hair lines are indication of a broken cell. It is a deception of quality as it has been laminated by placing the broken pieces very close to each other and made the cells to appear as fine cells. Once the cell is broken at any location(s), the smaller broken piece(s) do not add their power to the solar cell thick lines called Bus Bars (BB). These pieces are disconnected from the main cell.

In that case over all power of broken solar cell is decreased due to less flow of electron causing low current. The strings of solar cells is laying in series for generating required voltage (multiple of approximately 0.5 Vdc of each cell) and then these are connected in parallel for increasing the current. In case of broken cell(s), the overall current will be almost near to the minimum current generated by the broken solar cell(s) which lowers the overall power of Solar Module.

Irregular Line Pattern or Broken Fingers of the Solar Cells:

Misprinted fingers (lines used for collection of electrons and connecting to BB on upper surface of solar cells) or irregular or broken fingers result in decreasing the power generation. Thus, overall current will be almost near to the minimum current generated by such solar cell(s) and result is a low quality solar module.

Use of Plain Surface Glass instead of Solar Glass:

Hi-Quality modules are made with proper solar glass for minimizing the reflection of solar radiations. A high as 95 % of the solar energy which falls on the surface of module would pass through the glass to help generate maximum potential output power. On contrary, plain surface of glass reflects a lot of solar radiations falling on the surface of module. Normally, it can be shown that only 80 % radiation passes through the glass and as much as 20 % is reflected away. Such module generate less power.

B. Quick and Simple Test around Electrical Parameters:

Before finalizing the purchase, one should focus measuring the Open Circuit Voltage (Voc) and Short Circuit Current (Isc). As these are the two electrical parameters that should be checked to further ascertaining the quality of physically inspected and selected module. There is minimum or almost no need of any training to test such parameters. Knowledge of a common digital multi meter (DMM) suffices.

How to do the testing using a DMM? Tentatively place the module on the ground and lift from one side till it is sun facing at average of 25 degree to 35 degree angle, during 1100 Hrs to 1400 Hrs. (More accurate information can be sought in the comment box). Now, measure the dc voltage (Vdc) across two wires coming out from the junction box at the back of module. Make sure you conduct the test on a sunny/non cloudy day when the sun is shining full bright and there is no dust or cloud in the sky. The measured voltage should be close to Voc as printed on the sticker pasted on the back side of module. Similarly use DC Clamp meter on the multimeter with settings at dc Current, encircle the tongs around any one of the two wires coming out of the module of DMM (in closed position). Connect both the wires from module to make a short circuit loop. Note: At this moment a spark can be observed, do not worry as modules are protected using back to back junction diodes. Measure the Short Circuit Current (Isc) in this position. The value of measured current should be very close to Isc as printed on the sticker pasted on the back side of module. For example, if the module is 250 Wp , the measured Voc should be with in + 1.25 volt and Isc should with in + 0.75 ampere of printed value.

C. Proper Testing of Mono and Poly Solar Modules: For proper testing of modules, minimum two machines are needed including:

EL Tester is used to find out any of the broken cell laminated on a solar module. It allows inspection of the micro-cracks, breakage, broken fingers of the cells and pseudo-soldering of the modules; also enables to check any mismatch among the cells or find strings with different power rating.

Complete picture in black and white is displayed on a computer screen showing the white hair line(s) of broken part (s) of any of the cell(s). Good manufacturers replace such cells after reworking. The EL Tester also shows the homogeneity of cells. A Hi-Quality module shows similarity of cells in gray colour of same tone. A shade of gray colour of cells represents used cells which are not segregated properly. Usually, the cell efficiency varies with in +1 %. Also, within a single cell, some white or dark spots are seen on the screen. These spots show improper doping process of making ingot of Monocrystaline or cake of Polycrystalline while cutting the silicon wafers. Bulk buyers may ask the manufacturer or supplier for furnishing the EL Test report of the modules. For the interest of readers some technical information about a typical EL Tester Model GEL-610 is given as below:

Similarly, some more information about other electrical parameters completes the quality assessment of a module. Equipment used in the electrical performance testing of thin film, solar mono-crystalline silicon, poly-crystalline silicon, amorphous silicon cell module is the first choice for the solar cell and solar cell module manufacturer. Solar Module Tester (Sun Simulator) like Model GSMT-H-3A, the 3A (AAA) Sun Simulator is used in testing labs to measure the above stated parameters at highest accuracy where as GSMT-H-1A is used for testing of modules in commercial production process.

Options and accessories include like Horizontal type and Vertical type; with computer, monitor, printer, professional test software, dongle and other necessary spare parts.

Following test are made in one go and in only 10 milli second.

The measurements data taken on Sun Simulator is presented in the form of a Test Report also a limited version of this information is extracted from this test report, printed and pasted on sticker at back side of the module. The measurement on Sun Simulator can be considered as authenticated data if the Sun Simulator is periodically standardized by calibration using a standard module with traceability of its measurements to any National or International Institute of Metrology. Note: Preferably a member of Bureau of Weights and Measures (BIPM), Severe, France.

The cost of Hi-Quality solar modules can be obtained from the suppliers or manufacturers throughout the world.

Mostly the price of Hi-Quality modules form various manufacturers remain within 0.5 Cents to 5 Cents per Watt when compared with each other. Mind if the average price of a Mono Module offered by four to five manufacturers is say 65 Cents per Watt and offered price is drastically as low as 50 Cents per Watt or even lower then there must be a gross compromise on the quality due to above noted reasons.

Summarizing the selection process, while purchasing the modules always ask for the efficiency of module (say >16% for Mono and > 14% for Poly modules) with >85% FF along with a printed Test report or Sun Simulation Report (hard copy). Data printed on the Sticker pated on the back side of modules is not acceptable as a claim of Hi-Quality Solar Module.

Remember, the individual Test Report (Hard Copy) singed and stamped is the authenticated document to build up maximum confidence. However, almost all manufacturers get certification of their production by international certification bodies, which is good for small purchases. Large scale projects demand consistent quality assurance and Sun Simulation test data for purchasing the modules.

The prices of Hi-Quailty solar modules are almost same in all countries in the world. The manufacturers have Cell Sorting machines which are used to categorize the cells for example in case of Mono Crystalline cells with efficiency of 20 %, 19.5 % , 19 %…… 14 %, 13 %, 12 % etc. and Poly Crystalline cells of 17 %, 16.5 %, 15 %. …… 10 % , 9% and 8 % efficiency are segregated. Manufacturer with low prices offer low quality modules (with low efficiency of solar cells due to broken cells or missing fingers on the cells).

The video shared is by Sanyo, it further helps you select a solar module:

Drip irrigation is drop by drop application of water to the root zone of plant.…
Jawad Ghafoor 0
Solar Photovoltaics
October 9, 2017

At Zorays Solar Pakistan, profitability of your PV Solar Solution is calculated in terms of quickest…
Zorays Khalid 2